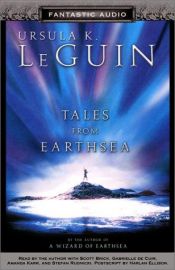 Tales from Earthsea is a collection of fantasy stories and essays by American author Ursula K. Le Guin, published by Harcourt in 2001. It accompanies five novels set in the fictional archipelago Earthsea.
Tales from Earthsea won the annual Endeavour Award, for the best book by a writer from the Pacific Northwest, and Locus Award, Best Collection, for speculative fiction collections. Two of the five collected stories were previously published, "Darkrose and Diamond" and "Dragonfly", and both had been nominated for annual awards.

The Ladies of Grace Adieu

The Rise of Endymion