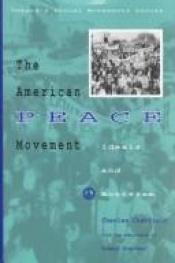 The American Peace Movement: Ideals and Activism (Social Movements Past and Present)

In November 1969 tens of thousands of demonstrators converged on Washington, D.C., to protest U.S. involvement in Vietnam. For four days they marched, sang, and made speeches calling for an end to the war; then they dispersed. Who were these people and what brought them together? Who was in charge and what did they hope to accomplish? What real effect did the event have on public opinion or foreign policy?
In The American Peace Movement: Ideals and Activism, Charles Chatfield explores such questions as they relate to the peace movement from the early nineteenth century up to the present. Combining a broad historical scope with a sociological perspective, the study examines the movement as a social process--an interaction of organizations, strategies, and goals. Chatfield analyzes public attitudes toward peace, war, and foreign policy, and the shifting constituencies of the various peace coalitions as the movement responded to specific challenges of the international situation. Detailed portrayals of events, goals, strategies, and leaders help bring the story of the peace movement vividly to life.

I Shall Not Hate: A Gaza Doctor's Journey on the Ro …

Global governance and the new wars

The Future of Peace: On the Front Lines with the Wo …

War! What Is It Good For?: Conflict and the Progres …

To prevail : an American strategy for the campaign …