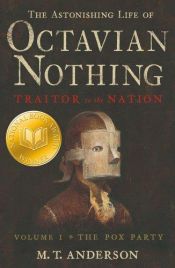 The Astonishing Life of Octavian Nothing, Traitor to the Nation, Volume One : The Pox Party (Anderson, M. T. Astonishing

Anderson’s imaginative and highly intelligent exploration of . . . the ambiguous history of America’s origins will leave readers impatient for the sequel. — THE NEW YORK TIMES BOOK REVIEW

Young Octavian is being raised by a group of rational philosophers known only by numbers — but it is only after he opens a forbidden door that learns the hideous nature of their experiments, and his own chilling role them. Set in Revolutionary Boston, M. T. Anderson’s mesmerizing novel takes place at a time when Patriots battled to win liberty while African slaves were entreated to risk their lives for a freedom they would never claim. The first of two parts, this deeply provocative novel reimagines past as an eerie place that has startling resonance for readers today.