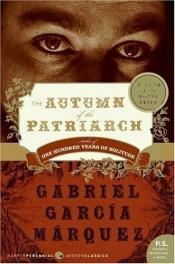 The Autumn of the Patriarch

The Autumn of the Patriarch is a novel written by Gabriel García Márquez in 1975.
A "poem on the solitude of power" according to the author, the novel is a flowing tract on the life of an eternal dictator. The book is divided into six sections, each retelling the same story of the infinite power held by the archetypical Caribbean tyrant.
García Márquez based his fictional dictator on a variety of real-life autocrats, including Gustavo Rojas Pinilla of his Colombian homeland, Generalissimo Francisco Franco of Spain, and Venezuela's Juan Vicente Gómez. The product is a universal story of the disastrous effects created by the concentration of power into a single man.