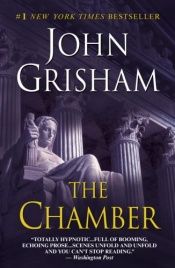 At first listen, the narration of this abridged version of John Grisham's The Chamber seems flat and uninvolved. But Michael Beck has chosen his vocal style well, purposely eschewing unnecessary adornment and allowing this searing indictment of racism and murder to unfold on its own terms. Beck uses character voices sparingly, adding subtle emphasis to the already charged plot. The story begins with a Klan-sponsored bombing and then traces a trail of rigged acquittals stretching over three decades, until a young lawyer with secrets of his own brings the case to a powerful conclusion. (Running time: 6 hours, 4 cassettes) --George Laney

This book is about a young lawyer (Adam Hall) fresh out of Law school who takes the case of his grandfather. The grandfather (Sam Cayhall) was a klansman who blew up a Jewish owned building killing two young jewish boys. I did a paper on this book back in high school for my AP literature class. It made me do some serious thinking about the death penalty and revenge. While I still believe we need the death penalty this book did give me pause.

Under the Dome: Part 1

Bridget Jones: the Edge of Reason