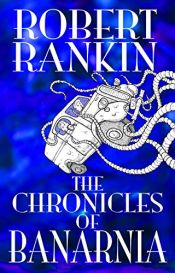 Shamelessly entitled The Chronicles of Banarnia is the second and concluding part of the final Brentford trilogy. Of which The Lord of the Ring Roads was probably the first. Or not.

Confused? Well, it's hardly surprising, is it?
This is a Robert Rankin book. One in which...

Brentford has been brought to ruination by a mighty supernatural storm.

The "First Folk", those of the Faerie Kingdom, are rising to reclaim their planet from "Darwinian" Man (the Sons of the Simian).

Driven beneath the surface of the world hundreds of years ago, after a battle fought upon the sacred soils of Brentford, they have returned to exact revenge upon their tormentors.

And who is there to stand against this magical army?
Well, there's a wizard, a giant and two blokes from down the Flying Swan.

What can go wrong most certainly will. But in a way that will make it all worthwhile.

Who Will Write Our History?: Rediscovering a Hidden …

Look at the Birdie: Short Fiction

All Systems Red: The Murderbot Diaries