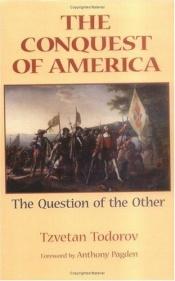 The Conquest of America: The Question of the Other

The Conquest of America: The Question of the Other is a book by Tzvetan Todorov first published in 1982, detailing Spanish colonials' contact with natives upon the "discovery" of the Americas.
It has been described as "one of the most provocative books of our time" by Princeton anthropology professor Gananath Obeyesekere, writing in his 1992 book The Apotheosis of Captain Cook that deals with a similar theme—albeit in a different setting—of initial contact between Western and indigenous cultures. Obeyesekere does go on to critique several of the approaches taken by Todorov and the latter's reliance upon Spanish conquistador sources that are themselves responsible for generating stereotypical views on the "Otherness" of the native population—stereotypes that Todorov had in part set out to counter.