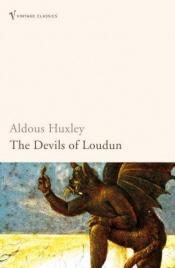 The Devils of Loudun is a 1952 non-fiction novel by Aldous Huxley. It is a historical narrative of supposed demonic possession, religious fanaticism, sexual repression, and mass hysteria which occurred in seventeenth-century France surrounding unexplained events that took place in the small town of Loudun. It centers on Roman Catholic priest Urbain Grandier and an entire convent of Ursuline nuns, who allegedly became possessed by demons after Grandier made a pact with Satan. The events led to several public exorcisms as well as executions by burning.
The story was adapted into a stage play in 1960, which was then adapted into the controversial 1971 Ken Russell film The Devils, which starred Vanessa Redgrave and Oliver Reed. There is also an opera based on the book, Die Teufel von Loudun, by Krzysztof Penderecki, available on DVD. The book, though lesser known than Huxley's other novels is widely considered one of his best works.

The history of the Devil and the idea of evil

Demons Are Forever: Confessions of A Demon Hunting …