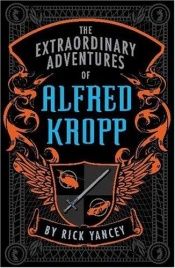 The Extraordinary Adventures of Alfred Kropp

Publishers Weekly gave the book a starred review upon release and named it one of their "Best Books for Children" in 2005, the book was a Carnegie Medal nominee in 2006, and the film rights to the book were picked up by Warner Bros. in 2005.
A sequel, Alfred Kropp: The Seal of Solomon, was released in May 2007. A third book, Alfred Kropp: The Thirteenth Skull, was released June 24, 2008.
The story is based on the modern times, with the obvious conspiracy with stealing the sword "Excalibur", said to be wielded by King Arthur himself in his time. It is said he threw it back to The Lady of The Lake before he died. Therefore, humans of modern times maybe placed another cover-up story to shield the Knights of the Round Table, who actually had the rights to the sword. The villain is an ex-knight, Mogart.

The Truth About Forever