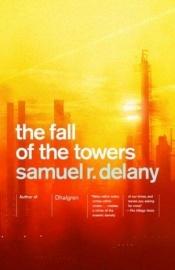 The Fall of the Towers [Out of the Dead City; The Towers of Toron; City of a Thousand Suns]

The Fall of the Towers is a trilogy of science fantasy books by Samuel R. Delany.
First published in omnibus form in 1970, the trilogy was originally published individually as Captives of the Flame, The Towers of Toron, and City of a Thousand Suns. The first two books were somewhat rewritten for the omnibus edition. Delany describes the extent of the rewriting in a final note in the one-volume text.
The stories of the Fall of the Towers trilogy were originally set in the same post-holocaust Earth as Delany's earlier The Jewels of Aptor; however, linking references were removed in later revised editions.

The Warlord of Mars

A Fighting Man of Mars (Martian Tales of Edgar Rice …

John Carter of Mars (The Martian Tales of Edgar Ric …