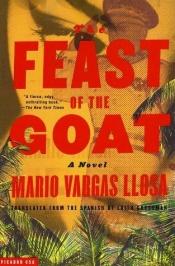 The Feast of the Goat

The Feast of the Goat is a novel by the Peruvian Nobel Prize in Literature laureate Mario Vargas Llosa. The book is set in the Dominican Republic and portrays the assassination of Dominican dictator Rafael Trujillo, and its aftermath, from two distinct standpoints a generation apart: during and immediately after the assassination itself, in May 1961; and thirty five years later, in 1996. Throughout, there is also extensive reflection on the heyday of the dictatorship, in the 1950s, and its significance for the island and its inhabitants.
The novel follows three interwoven storylines. The first concerns a woman, Urania Cabral, who is back in the Dominican Republic, after a long absence, to visit her ailing father; she ends up recalling incidents from her youth and recounting a long-held secret to her aunt and cousins. The second story line focuses on the last day in Trujillo's life from the moment he wakes up onwards, and shows us the regime's inner circle, to which Urania's father once belonged.