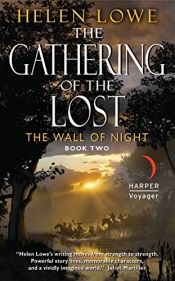 Sure to become an epic fantasy classic, Helen Lowe’s magnificent Wall of Night series is big, ambitious, and gorgeously drawn—a story of bravery, treachery, and cataclysm in a richly imagined world. The Gathering of the Lost is the second of four books set in a fantastic imperiled realm garrisoned by nine great Houses and protected from the terrible Darkswarm by the towering mountain range that gives the series its name. Supremely literate, brilliantly imagined and executed fantasy in the vein of Brandon Sanderson, Guy Gavriel Kay, and Barbara Hambly, The Gathering of the Lost is populated by a grand cast of unforgettable characters, some still holding to the beleaguered Wall, others scattered in their quest for the fabled Heir of Night, who vanished from their midst five years earlier.

The Reasons I Won't Be Coming