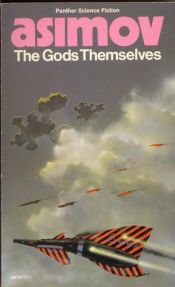 The Gods Themselves is a 1972 science fiction novel written by Isaac Asimov. It won the Nebula Award for Best Novel in 1972, and the Hugo Award for Best Novel in 1973.
The book is divided into three main parts, originally published in Galaxy Magazine and Worlds of If as three consecutive stories. The book opens at chapter 6, segments of which appear between chapters as the narrative proceeds through chapters 1 to 5. In effect, chapters 1 to 5 are flashbacks in the narrative of chapter 6, giving the history leading up to the present time of chapter 6. Chapter 6 then concludes, and the story proceeds with chapter 7.

The Forge of God