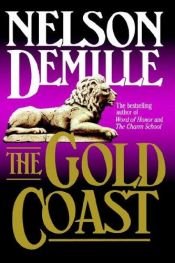 The Gold Coast is a 1990 novel by Nelson DeMille.
It is about John Sutter, a Wall Street lawyer, and Frank Bellarosa, a mafia don, and the conflict between the two that occurs when Bellarosa moves to the North Shore, the same New York neighborhood as Sutter. Bellarosa befriends Sutter and his wife Susan, and convinces Sutter to represent him in a high-profile case. This draws unwanted attention to Sutter from the Internal Revenue Service and embroils him in a tangled web of deceit and betrayal.
The Gate House, a sequel to The Gold Coast, was released on October 28, 2008.