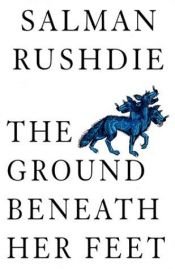 The Ground Beneath Her Feet

The Ground Beneath Her Feet is Salman Rushdie's sixth novel. Published in 1999, it is a variation on the Orpheus/Eurydice myth with rock music replacing Orpheus' lyre. The myth works as a red thread from which the author sometimes strays, but to which he attaches an endless series of references.
The book, while at its core detailing the love of two men, Ormus Cama and Umeed "Rai" Merchant, for the same woman, Vina Apsara, provides a background and alternate history to the entire 1950s–1990s period of the growth of rock music. The minor characters of the story are particularly interesting, as they provide the most vivid portraits of the cultures and backgrounds that come into play in the story. Defined by Toni Morrison as "a global novel", the book sets itself in the wide frame of Western and post-colonial culture, through the multilingualism of its characters, the mixture of East and West and the great number of references that span from Greek mythology, European philosophy and contemporaries such as Milan Kundera and the stars of rock'n roll.
The title is taken from a song from the novel, composed by Ormus Cama after Vina's death.

I Capture the Castle

By the River Piedra I Sat Down and Wept