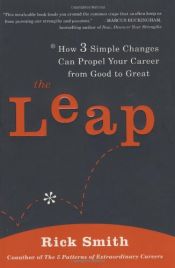 The Leap: How 3 Simple Changes Can Propel Your Career from Good to Great

Have you ever asked yourself, "Is this it?"

Maybe you're trapped in a dead-end job that you're afraid to leave. Or maybe you already have a good job-one that gives you room to grow and exercise your talents-but you don't really feel like you're doing your best work. Your life is plain vanilla, yet you know in your heart that you can be a triple scoop banana split. You just don't know how to make that leap.

So what do you do?

Rick Smith knows firsthand what it's like to feel stuck in a career rut. He worked in a midlevel job where he had modest success. Then his life took an unexpected turn and he found himself creating a business that became successful beyond his wildest dreams. He unlocked a level of performance he did not know he had in him. After all, Smith was just a regular guy who didn't like to take chances or even step outside his comfort zone. But as he found out, those qualities don't have to be stumbling blocks. In fact, they're two of the keys to making the leap from good to great.

And after talking to others who had also transformed their careers from mundane to magnificent, he realized that the secret doesn't lie with some mysterious talent, trait, or affinity for risk. And it certainly doesn't require you to quit your job and start from scratch. Rather, it lies with your ability to harness your true strengths and passions-what Smith calls your Primary Color.

You'll meet remarkable people who've made the leap, such as:
Through powerful anecdotes, lessons from brain science, and tools for self-assessment, Smith shows how, with the right amount of passion, determination, and three simple steps, anyone can make the leap to a more successful and fulfilling life.

Anybody Can Do Anything

How I Raised Myself From Failure to Success in Sell …

Zen and art of making a living : a practical guide …

A PhD Is Not Enough: A Guide To Survival In Science

How to Fail at Almost Everything and Still Win Big: …

Deep Work: Rules for Focused Success in a Distracte …