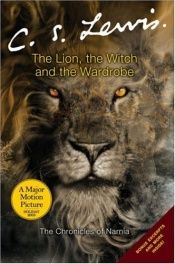 The Lion, the Witch and the Wardrobe is a high fantasy novel for children by C. S. Lewis, published by Geoffrey Bles in 1950. It was the first published of seven novels in The Chronicles of Narnia and the best known; among all the author's books it is the most widely held in libraries. Although it was written as well as published first in the series, it is volume two in recent editions, which are sequenced according to Narnia history. Like the others, it was illustrated by Pauline Baynes, and her work has been retained in many later editions.
Most of the novel is set in Narnia, a land of talking animals and mythical creatures that the White Witch has ruled for 100 years of deep winter. In the frame story, four English children live in a big, old country house during their World War II evacuation from London. The youngest visits Narnia three times via the wardrobe in a spare room. All four children are together on her third visit, which validates her stories and comprises the last 12 of 17 chapters except a brief conclusion. In Narnia the siblings seem to fulfill an old prophecy, so they are soon adventuring both to save Narnia and their lives.

The Voyage of the Dawn Treader (The Chronicles of N …