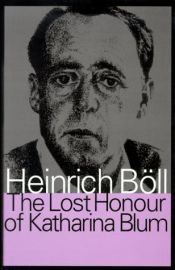 The Lost Honour of Katharina Blum

The Lost Honour of Katharina Blum, or: how violence develops and where it can lead is a 1974 novel by Heinrich Böll.
The story deals with the sensationalism of tabloid news and the political climate of panic over Red Army Faction terrorism in the 1970s Federal Republic of Germany. The main character, Katharina Blum, is an innocent housekeeper whose life is ruined by an invasive tabloid reporter and a police investigation when the man with whom she has just fallen in love turns out to be wanted by the police because of a bank robbery. The book's fictional tabloid paper, Die Zeitung, is modelled on the actual German Bild-Zeitung.