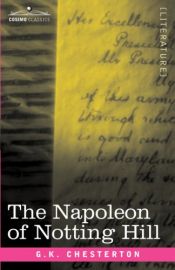 The Napoleon of Notting Hill

The Napoleon of Notting Hill is a novel written by G. K. Chesterton in 1904, set in a nearly unchanged London in 1984.
Although the novel is set in the future, it is, in effect, set in an alternative reality of Chesterton's own period, with no advances in technology or changes in the class system or attitudes. It postulates an impersonal government, not described in any detail, but apparently content to operate through a figurehead king, randomly chosen.

The Man Who Was Thursday

Travels with My Aunt