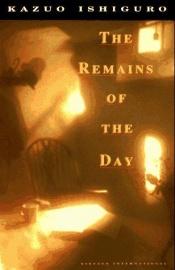 The Remains of the Day is Kazuo Ishiguro's third published novel. The work was awarded the Man Booker Prize for Fiction in 1989. A film adaptation of the novel, made in 1993 and starring Anthony Hopkins and Emma Thompson, was nominated for eight Academy Awards.
As in Ishiguro's two previous novels, the story is told from a first person point of view. The narrator, Stevens, a butler, recalls his life in the form of a diary while the action progresses through the present. Much of the novel is concerned with Stevens's professional and, above all, personal relationship with a former colleague, the housekeeper Miss Kenton.