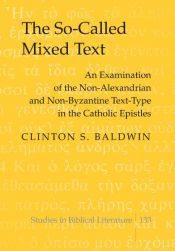 In recent years, a number of scholars have identified a text-type in six of the books of the Catholic Epistles that they have called «mixed.» The So-Called Mixed Text: An Examination of the Non-Alexandrian and Non-Byzantine Text-Type in the Catholic Epistles is concerned with a comprehensive identification and evaluation of this so-called mixed text-type. This mixed category, if supported by empirical investigation to be more original than the Alexandrian and Byzantine texts, could necessitate the re-evaluation of these established text-types and also the re-evaluation of the designation «mixed» attributed to this group.
In pursuit of this objective, Clinton S. Baldwin undertakes an in-depth study of this mixed phenomenon by studying 407 Greek manuscripts of the Catholic Epistles. Having identified 13 mixed groups across the Catholic Epistles, it is shown that the weighted value of this mixed category is negligible in terms of uncovering the earliest originals. Also of significance to this study is the use of factor analysis for the classification of New Testament Greek manuscripts. The reliability of factor analysis is demonstrated by another vital contribution of this study: the classification of the manuscripts of the Epistle of Jude, a book which hither-to-fore had not been comprehensively classified. Most of the manuscripts classified by factor analysis have later been confirmed by a modified form of the Claremont Profile Method. Finally, The So-Called Mixed Text demonstrates that the evolution of the New Testament text, which began in the earlier centuries, continued into the Middle Ages.

The book of Genesis illustrated

Who Wrote the New Testament?: the Making of the Chr …

The Problem with Evangelical Theology

John: the Gospel of belief : an analytic study of t …

Rescuing The Bible From Fundamentalism: A Bishop Re …