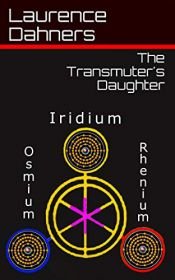 The Transmuter’s Daughter is a near-future science-fiction thriller about a discovery that allows transmutation of elements, i.e. into platinum.
Morgan Djai’s company’s been bought out, he’s been laid off, his wife wants a divorce, and his brilliant but estranged brother has just been murdered with a $10,000 chunk of platinum in the pocket of his jeans.
As Morgan tries to assume his duties as guardian for his brother’s teenage children he’s confronted with the mystery of why his brother died carrying the platinum.
Morgan’s fifteen year old niece is striking in appearance but hostile in attitude. His nephew’s pleasant but defers all questions about the platinum to his sister.
It slowly becomes evident that Morgan’s brother made the platinum. He was killed by people who wanted his secret. His niece knows how the platinum was created but doesn’t want to tell Morgan.
The people who killed his brother still want the platinum…
Damn…

Across the Sea of Suns