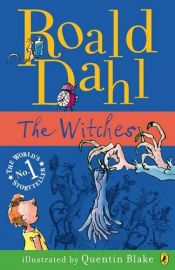 The Witches is a children's book by British author Roald Dahl, first published in London in 1983 by Jonathan Cape. The book, like many of Dahl's works, is illustrated by Quentin Blake. The story is partly set in Norway and partly in the United Kingdom, focusing on the experiences of a young boy and his Norwegian grandmother in a world where child-hating evil witches secretly exist.
The book was adapted into an unabridged audio reading by Lynn Redgrave, a stage play and a two-part radio dramatisation for the BBC, a 1990 movie directed by Nicolas Roeg and an opera by Marcus Paus and Ole Paus.