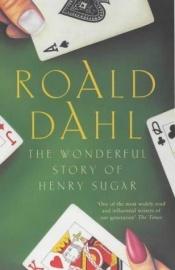 The Wonderful Story of Henry Sugar and Six More

The Wonderful Story of Henry Sugar and Six More is a collection of seven short stories written by Roald Dahl. They are generally regarded as being aimed at a slightly older audience than many of his other children's books.
The stories were written at varying times throughout his life. Two of the stories are autobiographical in nature; one describes how he first became a writer while the other describes some of Dahl's experiences as a fighter pilot in World War II. Another piece in the collection is a non-fiction account of a British farmer finding a legendary haul of ancient Roman treasure. The book was first published in London in 1977 by Jonathan Cape.