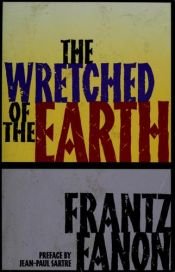 The Wretched of the Earth

The Wretched of the Earth is a 1961 book by Frantz Fanon, a psychiatric and psychologic analysis of the dehumanising effects of colonization upon the individual, and the nation, from which derive the broader social, cultural, and political implications inherent to establishing a social movement for the decolonization of a person and of a people. The French-language title derives from the opening lyrics of "The Internationale", the 19th-century anthem of the Left Wing.
In his introduction to the 1961 edition of The Wretched of the Earth, the philosopher Jean-Paul Sartre supported Frantz Fanon’s advocacy of justified violence by the colonized people against the foreign colonizer, as necessary for their mental health and political liberation; Sartre later applied that introduction in Colonialism and Neocolonialism, a politico–philosophic critique of France’s Algerian colonialism. The political focus derives from the first chapter of the book, “Concerning Violence”, wherein Fanon indicts colonialism and its post-colonial legacies, for which violence is a means of catharsis and liberation from being a colonial subject.