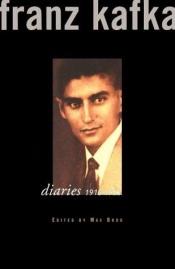 Franz Kafka's Diaries, written in German language between 1910-1923, include casual observations, details of daily life, reflections on philosophical ideas, accounts of dreams, and ideas for stories. Kafka’s diaries offer a detailed view of the writer's thoughts and feelings, as well as some of his most famous and quotable statements.
Kafka began keeping the diaries at the age of 27, as an attempt to provoke his stalled creativity, and kept writing in them until 1923, a year before his death. These diaries were in the background all through the composition of Kafka's major works and many of them are discussed and analyzed in detail.
The diaries offer an image of a profoundly depressed man, isolated from friends and family, involved in a series of failed relationships, and constantly sick. While this is certainly part of Kafka's character, it is typical for a private journal, not meant for publication, to express more of the writer's anxieties and worries. The humor and light-heartedness sometimes expressed in Kafka's fiction, as well as the generally positive image arising from recollections by friends and acquaintances, are missing from the diaries.

Letter to His Father

The World of Yesterday

When I Was a Little Boy

I was a German