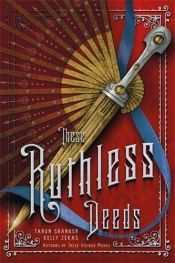 These Ruthless Deeds (These Vicious Masks)

Everyone’s favorite sarcastic Victorian healer is back in the sequel to These Vicious Masks, and this time she’s struggling with both a sinister secret society and an increasingly tangled love life...

England, 1883. Recovering from a devastating loss, Evelyn has become determined to use her powers to save other gifted people from those who would study and oppress them. But when her rescue of a young telekinetic girl goes terribly wrong, Evelyn finds herself involved with a secret society devoted to recruiting and protecting people like Evelyn and her friends.

Like magic, Evelyn’s problems start to disappear. Her reputation is repaired, her friends are provided for, and her parents are thrilled at all her new suitors. She’s even been reunited with the dashing Mr. Kent and the reclusive Mr. Braddock (who is much less brooding now that the society is helping him to control his dangerous power). Yet, somehow Evelyn can’t help fearing that there is something sinister going on…

Praise for These Vicious Masks:

"Striking a strong balance between romance and mystery, this novel captures society’s rules just as well as it does the unbelievable powers of the main characters. Readers will easily be swept up in its fast pace and sympathetic narrator, who is filled with both self-doubt and resolve to do anything to protect those she loves. This is a perfect pick for someone who wants a little magic in their Victorian novels, and its combination of historical fiction and mysticism will remind readers of Libba Bray’s Gemma Doyle trilogy." ―Booklist

"This tale has brisk pacing, plenty of action, and a heroine with more than her fair share of girl-power confidence." ―School Library Journal

“So much fun! Like a story by one of the Bronte sisters or Jane Austen, except the characters are much more self-aware and genre-savvy.” ―Duncan Pflaster, Swoon Reader