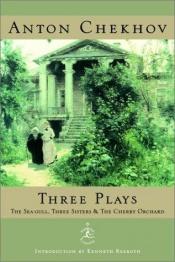 Anton Chekhov, the first great dramatist of the twentieth century, forged his theater from the tumultuous society in which he lived and worked, the pre-Revolutionary Russia of decadent aristocrats, restless intellectuals, and ambitious peasants; in the process, he liberated the stage from the arch fustiness of nineteenth-century conventions and presented life onstage as it had never been seen before: life as it is lived. His characters, from the yearning Irina of Three Sisters and the vain, self-centered Arkadina in The Sea-gull to the crude but tenderhearted Lopahin in The Cherry Orchard, are riveting embodiments of the frailty of the human condition, presented with stunning clarity and naturalism, that have fascinated actors, playgoers, and readers for more than a century. As Kenneth Rexroth writes in his Introduction, "We accept these tragic comedies... the way we would accept life itself if we were gifted with sudden wisdom."

Three Plays contains those works many consider the apex of Chekhov's dramatic achievement: The Sea-gull, Three Sisters, and The Cherry Orchard. Presented here in classic translations by Constance Garnett, these plays testify to Chekhov?s enduring influence on the modern drama.

Life Is a Dream

The Bald Soprano and The Lesson: Two Plays -- A New …