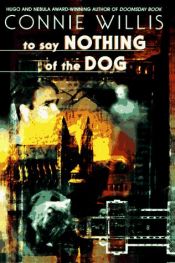 From Connie Willis, winner of multiple Hugo and Nebula Awards, comes a comedic romp through an unpredictable world of mystery, love, and time travel...
Ned Henry is badly in need of a rest. He's been shuttling between the 21st century and the 1940s searching for a Victorian atrocity called the bishop's bird stump. It's part of a project to restore the famed Coventry Cathedral, destroyed in a Nazi air raid over a hundred years earlier.
But then Verity Kindle, a fellow time traveler, inadvertently brings back something from the past. Now Ned must jump back to the Victorian era to help Verity put things right--not only to save the project but to prevent altering history itself.

Three Men in a Boat

Tales Too Ticklish to Tell

The Night of the Mary Kay Commandos

Billy and the Boingers Bootleg

Diary of a Wimpy Kid

Blott on the Landscape