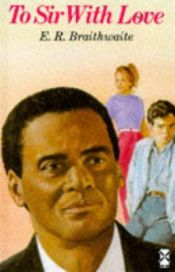 To Sir, With Love

To Sir, With Love is a 1959 autobiographical novel by E. R. Braithwaite set in the East End of London. The novel is based on true events concerned with Braithwaite taking up a teaching post in a school there.
In 1967, the novel was made into a film, To Sir, with Love, starring Sidney Poitier and Lulu, and the film's title song became a number-1 hit that year. The setting for the film was changed from postwar London to the "swinging sixties", and, notwithstanding its success, Braithwaite had ambivalent feelings towards it, as he admitted in an interview with Burt Caesar conducted for a 2007 BBC Radio 4 programme entitled To Sir, with Love Revisited. Also in 2007, the novel was dramatized for Radio 4 by Roy Williams and broadcast in two parts, starring Kwame Kwei-Armah.

I Never Promised You a Rose Garden