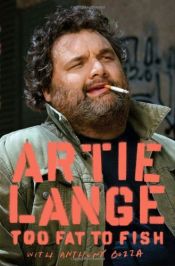 Too Fat to Fish is a collection of memoirs by American comedian, radio personality and actor Artie Lange. Published by Spiegel & Grau on November 11, 2008, the book is co-written by journalist Anthony Bozza. Lange dedicated the book to radio personality Howard Stern, who also writes its foreword. It is said that Lange writes about his "most personal revelation" in the book.
Too Fat to Fish debuted at number one on the The New York Times Best Seller list, holding the position for one week. A paperback edition was released on June 2, 2009, which included a bonus chapter and alternate back cover.

The Order of Odd-Fish

Dont Stand Too Close To A Naked Man