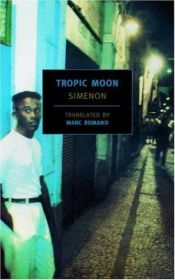 Newly translated for this edition.

A young Frenchman, Joseph Timar, travels to Gabon carrying a letter of introduction from an influential uncle. He wants work experience; he wants to see the world. But in the oppressive heat and glare of the equator, Timar doesn't know what to do with himself, and no one seems inclined to help except Adèle, the hotel owner's wife, who takes him to bed one day and rebuffs him the next, leaving him sick with desire. But then, in the course of a single night, Adèle's husband dies and a black servant is shot, and Timar is sure that Adèle is involved. He'll cover for the crime if she'll do what he wants. The fix is in. But Timar can't even begin to imagine how deep.

In Tropic Moon, Simenon, the master of the psychological novel, offers an incomparable picture of degeneracy and corruption in a colonial outpost.

The Girl of His Dreams

The Two Faces of January