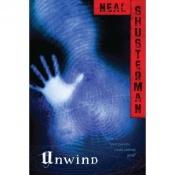 Unwind is a 2007 science fiction novel by young adult literature author Neal Shusterman. It takes place in the United States, after a civil war somewhere in the near future. After a civil war—known as the Second Civil War or the Heartland War—is fought over abortion, a compromise was reached, allowing parents to sign an order for their children between the ages of 13 and 18 years old to be unwound—taken to "harvest camps" and having their body parts harvested for later use. The reasoning was that, since 100% was required to be used, unwinds did not technically "die", because their individual body parts lived on. In addition to unwinding, parents who are unable to raise their children to age thirteen for retroactive abortion have the option to "stork" their child by leaving it on another family's porch. If they don't get caught, the "storked" baby then becomes the other family's responsibility.
Unwind received positive reviews upon release, with praise focusing on the novel's immersive environment and sociological implications. It also received many awards from young adult literature authorities. A film adaptation of Unwind is currently in production by independent producers.

Parable of the Sower