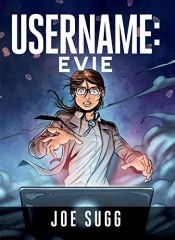 The first book by YouTube star Joe Sugg tells the story of Evie, a socially-isolated teenage girl who struggles to fit in at high school. Always looking for a way to escape, she spends her nights supporting her terminally-ill father, who is tirelessly working on a computer program. When her father passes away, Evie is forced to live with her aunt, uncle, and cousin—Mallory—who is the most popular girl in school and the bane of Evie's existence.

One night, as she's going through her father's computer, Evie stumbles on a strange file that sucks her into a virtual world. As Evie explores this strange, new land, she learns it was the project her father was working so tirelessly on: a virtual Eden where Evie can get away and be herself. However, Evie is not alone; Mallory also discovers the world and her presence causes the idyll to descend into chaos. Now Evie must save the virtual world or lose her last connection to her father.

Joe sugg's book username: Evie was amazing, story line brilliant. Now I'm not the tripe of person that picks up a comic and what's to read it, but I loved this book so much. I would recommend this book to anyone literally, if you like action, emotions and drama read this!

The Stealers of Dreams (Doctor Who #6)