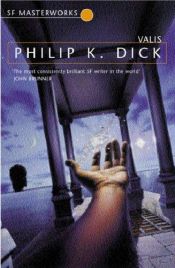 VALIS is a 1981 science fiction novel by Philip K. Dick. The title is an acronym for Vast Active Living Intelligence System, Dick's gnostic vision of one aspect of God.
It is the first book in the incomplete VALIS trilogy of novels, followed by The Divine Invasion. The planned third novel, The Owl in Daylight had not yet taken definite shape at the time of the author's death. Radio Free Albemuth, a posthumously published earlier version of VALIS, is not included as a component of the VALIS trilogy. Dick completed one more novel after The Divine Invasion, The Transmigration of Timothy Archer, based on Dick's association with Bishop James A. Pike and not connected to the VALIS theme.

The Transmigration of Timothy Archer

Sword & Citadel: The Second Half of the Book of …

Eye in the Sky