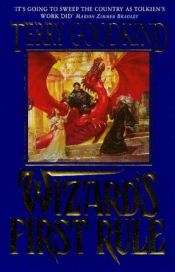 Wizard's First Rule, written by Terry Goodkind, is the first book in the epic fantasy series The Sword of Truth. Published by Tor Books, it was released on August 15, 1994 in hardcover, and in paperback on July 15, 1997. The book was also re-released with new cover artwork by Keith Parkinson in paperback on June 23, 2001. The novel was adapted to television in the 2008 television series Legend of the Seeker.
Goodkind had no trouble selling his first book to a publisher. "I'm sort of the exception that proves the rule," he says. "I wanted to be represented by the best agent in the country and I wrote him a letter. He asked to see the book and he liked it. He showed it to a number of publishers. Three of them had an auction. Ten weeks after I'd written 'The End' it sold for a record price," the most money ever paid for a fantasy novel by a first time author.

Temple of the Winds

Blood of the Fold

Faith of the Fallen

Soul of the Fire

The Pillars of Creation