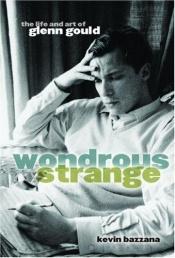 When Mikhail Baryshnikov defected in Toronto in 1974, he admitted that he knew only three things about Canada: It had great hockey teams, a lot of wheatfields, and Glenn Gould.
In Wondrous Strange, Kevin Bazzana vividly recaptures the life of Glenn Gould, one of the most celebrated pianists of our time. Drawing on twenty years of intensive research, including unrestricted access to Gould's private papers and interviews with scores of friends and colleagues, many of them never interviewed before, Bazzana sheds new light on such topics as Gould's family history, his secretive sexual life, and the mysterious problems that afflicted his hands in his later years. The author places Gould's distinctive traits--his eccentric interpretations, his garish onstage demeanor, his resistance to convention--against the backdrop of his religious, upper- middle-class Canadian childhood, illuminating the influence of Gould's mother as well as the lasting impact of the only piano teacher Gould ever had. Bazzana offers a fresh appreciation of Gould's concert career--his high-profile but illness-plagued international tours, his adventurous work for Canadian music festivals, his musical and legal problems with Steinway & Sons. In 1964, Gould made the extraordinary decision to perform only for records, radio, television, and film, a turning point that the author examines with unprecedented thoroughness (discussing, for example, his far-seeing interest in new recording technology). Here, too, are Gould's interests away from the piano, from his ambitious but failed effort to be a composer to his innovative brand of "contrapuntal radio."
Richly illustrated with rare photographs, Wondrous Strange is a superbly written account of one of the most memorable and accomplished musicians of our times.

The Reawakening / The Truce

Piano Notes: The World of the Pianist