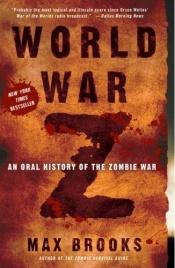 World War Z: An Oral History of the Zombie War is an apocalyptic horror novel by Max Brooks. The novel is a collection of individual accounts narrated by an agent of the United Nations Postwar Commission, following the devastating global conflict against the zombie plague. Other passages record a decade-long desperate struggle, as experienced by people of various nationalities. The personal accounts also describe the resulting social, political, religious, and environmental changes.
World War Z is a follow-up to Brooks' "survival manual" The Zombie Survival Guide, but its tone is much more serious. It was inspired by The Good War: An Oral History of World War Two by Studs Terkel, and by the zombie films of George A. Romero. Brooks used World War Z to comment on government ineptitude and American isolationism, while also examining survivalism and uncertainty. The novel was a commercial hit and was praised by most critics.
Its audiobook version, performed by a full cast including Alan Alda, Mark Hamill, and John Turturro, won an Audie Award in 2007. A film inspired by the novel, directed by Marc Forster and starring Brad Pitt, was released in 2013.

Not my type of book, some of the shorts were good, but some were boring as hell.