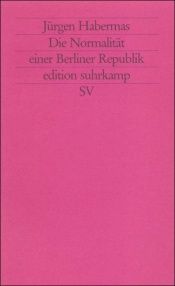 A Berlin Republic is a 1997 book composed of a collection of transcripts of interviews with the German philosopher and sociologist Jürgen Habermas conducted by various European media in the mid-1990s. The common thread of the interviews is Habermas's disagreement with resurgent German nationalism after the reunification with the former German Democratic Republic.
Habermas's theoretical works are in the background of the interviews. At the time of the interviews, in the early 1990s, Habermas was publishing Between Facts and Norms, his philosophy of law and politics, and writing the political-philosophical essays which would later be collected in the volumes published in English as Justification and Application and The Inclusion of the Other.
In A Berlin Republic, Habermas wages an intellectual campaign in Germany's political public sphere against what he sees as the backward-looking influence of German political theorist and proponent of Nazism, Carl Schmitt, and the philosopher Martin Heidegger. Schmitt advocated a "normalizing" view of German history, whereby Communism and Nazism would be equated, and the continuity of a reunified Germany with her pre-1945 past would be affirmed.