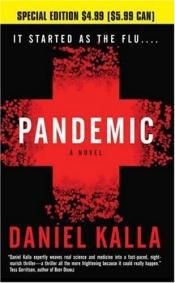 Genesis of a Plague

Right now, in a remote corner of rural China, a farmer and his family are sharing their water supply with their livestock: chickens, ducks, pigs, sheep. They share the same waste-disposal system, too.

Bird viruses meet their human counterparts in the bloodstreams of the swine, where they mix and mutate before spreading back into the human population. And a new flu is born....

Dr. Noah Haldane, of the World Health Organization, knows that humanity is overdue for a new killer flu, like the great influenza pandemic of 1919 that killed more than twenty million people in less than four months. So when a mysterious new strain of flu is reported in the Gansu Province of mainland China, WHO immediately sends a team to investigate.

Haldane and his colleagues soon discover that the new disease, dubbed Acute Respiratory Collapse Syndrome, is far more deadly than SARS, killing one in four victims, regardless of their age or health. But even as WHO struggles to contain the outbreak, ARCS is already spreading to Hong Kong, London, and even America.

In an age when every single person in the world is connected by three commercial flights or fewer, a killer bug can travel much faster than the flu of 1919.

Especially when someone is spreading the virus on purpose...