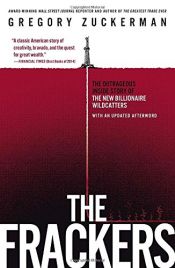 The Frackers: The Outrageous Inside Story of the New Billionaire Wildcatters

Things looked grim for American energy in 2006, but a handful of wildcatters were determined to tap massive deposits of oil and gas that giants like Exxon and Chevron had ignored. They risked everything on a new process called fracking. Within a few years, they solved America’s dependence on imported energy, triggered a global environmental controversy, and made and lost astonishing fortunes.

No one understands the frackers—their ambitions, personalities, and foibles—better than Wall Street Journal reporter Gregory Zuckerman. His exclusive access drives this dramatic narrative, which stretches from North Dakota to Texas to Wall Street.

20$ Per Gallon- How the Inevitable Rise in the Pric …

Who Turned Out the Lights?: Your Guided Tour to the …

Onward: How Starbucks Fought for Its Life without L …

The Googlization of Everything: (And Why We Should …

More Money Than God: Hedgefunds and the Making of a …