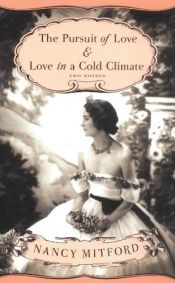 The pursuit of love ; and, Love in a cold climate

Few aristocratic English families of the twentieth century enjoyed the glamorous notoriety of the infamous Mitford sisters. Nancy Mitford's most famous novels, The Pursuit of Love and Love in a Cold Climate, satirize British aristocracy in the twenties and thirties through the amorous adventures of the Radletts, an exuberantly unconventional family closely modelled on Mitford's own.

The Radletts of Alconleigh occupy the heights of genteel eccentricity, from terrifying Lord Alconleigh (who, like Mitford's father, used to hunt his children with bloodhounds when foxes were not available), to his gentle wife, Sadie, their wayward daughter Linda, and the other six lively Radlett children. Mitford's wickedly funny prose follows these characters through misguided marriages and dramatic love affairs, as the shadow of World War II begins to close in on their rapidly vanishing world.