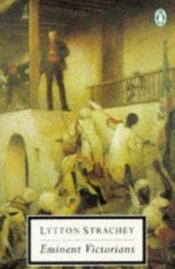 Eminent Victorians is a book by Lytton Strachey, first published in 1918 and consisting of biographies of four leading figures from the Victorian era. Its fame rests on the irreverence and wit Strachey brought to bear on three men and a woman who had till then been regarded as heroes and heroine. They were:
Cardinal Manning
Florence Nightingale
Thomas Arnold
General Gordon
The book made Strachey's name and placed him firmly in the top rank of biographers, where he remains.

This Boy's Life: A Memoir