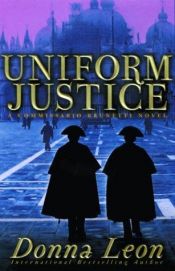 For more than a decade Donna Leon has been a bestseller in Europe with a series of mysteries featuring Commissario Guido Brunetti. Always ready to bend the rules to solve a crime, Brunetti manages to maintain his integrity while maneuvering through a city rife with politics, corruption, and intrigue.

In Uniform Justice, a young cadet has been found hanged, a presumed suicide, in Venice’s elite military academy. Brunetti’s sorrow for the boy, so close in age to his own son, is rivaled only by his contempt for a community that is more concernedwith protecting the reputation of the school, and its privileged students, than with finding the truth. The young man’s father is a doctor and former politician. He is a man of an impeccable integrity who inexplicably avoids talking to the police. As Brunetti pursues his inquiry, he is faced with a wall of silence. Is the military protecting its own? Or has Brunetti uncovered a conspiracy far more sinister than that of a single death?