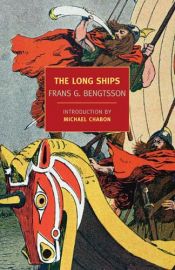 The Long Ships or Red Orm is an adventure novel by the Swedish writer Frans G. Bengtsson. The narrative is set in the late 10th century and follows the adventures of the Viking Röde Orm - Red Serpent, - called "Red" for his hair and his temper, a native of Scania. The book portrays the political situation of Europe in the later Viking Age, Andalusia under Almanzor, Denmark under Harald Bluetooth, followed by the struggle between Eric the Victorious and Sweyn Forkbeard, Ireland under Brian Boru, England under Ethelred the Unready, and the Battle of Maldon, all before the backdrop of the gradual Christianisation of Scandinavia, contrasting the pragmatic Norse pagan outlook with the exclusiveness of Islam and Christianity.
The novel is divided into two parts, published in 1941 and 1945, with two books each. It is one of the most widely read books in Sweden, topping the charts of most loaned books at Swedish libraries for many years. The first part was translated to English by Barrows Mussey as Red Orm in 1943, but later editions and newer translations by Michael Meyer use the title The Long Ships. The book has been translated into at least 23 languages.

Star of the Sea