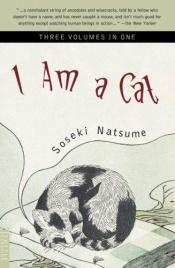 I Am a Cat is a satirical novel written in 1905–1906 by Natsume Sōseki, about Japanese society during the Meiji Period; particularly, the uneasy mix of Western culture and Japanese traditions, and the aping of Western customs.
Sōseki's original title, Wagahai wa neko de aru, uses very high-register phrasing more appropriate to a nobleman, conveying a grandiloquence and self-importance intended to sound ironic, since the speaker, an anthropomorphised domestic cat, is a house cat, not feral.
The book was first published in ten installments in the literary journal Hototogisu. At first, Sōseki intended only to write the short story that constitutes the first chapter of I Am a Cat. However, Takahama Kyoshi, one of the editors of Hototogisu, persuaded Sōseki to serialize the work, which evolved stylistically as the installments progressed. Nearly all the chapters can stand alone as discrete works.
In the mid-1970s, the prolific screenwriter Toshio Yasumi adapted Sōseki's novel into a screenplay. Kon Ichikawa directed the film, which premiered in Japanese cinemas in 1975. The novel was also adapted into a film released in 1936, and an anime television special aired in 1982.

I liked the humor in this book, the sharp observations on Japanese society, the cynic tone only a cat could have watching us humans doing our stupid stuff :-) I suggest it, but it's not something to read before sleeping (it need a certain amount of concentration)