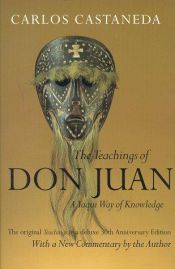 The Teachings of Don Juan: A Yaqui Way of Knowledge was published by the University of California Press in 1968 as a work of anthropology. It was written by Carlos Castaneda and submitted as his Master’s thesis in the school of Anthropology. It documents the events that took place during an apprenticeship with a self-proclaimed Yaqui Indian Sorcerer, don Juan Matus from Sonora, Mexico between 1960 and 1965.
The book is divided into two sections. The first section, The Teachings, is a first person narrative that documents Castaneda's initial interactions with don Juan. He speaks of his encounters with Mescalito, divination with lizards, and flying in animal form using the "Devil's Weed". The second, A Structural Analysis, is an attempt, Castaneda says, at "disclos[ing] the internal cohesion and the cogency of don Juan’s Teachings."
The 30th anniversary edition, published by the University of California Press in 1998, contains commentary by Castaneda not present in the original edition.

The Second Ring of Power

The Fire from Within

The Art of Dreaming

Ishi in two worlds : a biography of the last wild I …