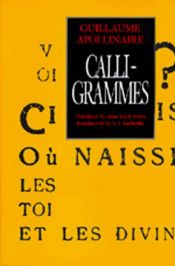 Calligrammes, subtitled Poems of Peace and War 1913-1916, is a collection of poems by Guillaume Apollinaire which was first published in 1918. Calligrammes is noted for how the typeface and spatial arrangement of the words on a page plays just as much of a role in the meaning of each poem as the words themselves - a form called a calligram. In this sense, the collection can be seen as either concrete poetry or visual poetry. Apollinaire described his work as follows:
The Calligrammes are an idealisation of free verse poetry and typographical precision in an era when typography is reaching a brilliant end to its career, at the dawn of the new means of reproduction that are the cinema and the phonograph.