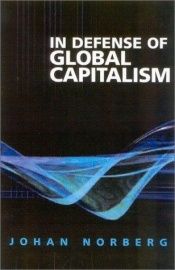 In Defense of Global Capitalism is a book by Swedish writer Johan Norberg promoting economic globalization and free trade. The book was originally published in May 2001 by the Swedish think tank Timbro. Since then, a number of translations into other languages have followed.
In the book, Norberg examines the arguments put forward by the anti-globalization movement. According to Norberg, "the diffusion of capitalism in the last decades has lowered poverty rates and created opportunities for individuals all over the world. Living standards and life expectancy has risen fast in most places. World hunger, infant mortality, and inequality have diminished. This is because of economic and technological development that is the result of free market policies. The poor countries that have liberalized their economies have shown impressive results, while those that have not are stuck in deep misery. Therefore, we need more capitalism and globalisation if we want a better world, not less".
As of 2008, the book has been translated into a dozen of languages including: English, German, Dutch, Turkish, Estonian, French, Finnish, Spanish, Chinese, Polish, and Czech.