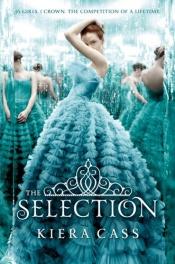 The Selection is a 2012 young adult novel by Kiera Cass and the first book in The Selection Series, which consists of five books, the last one being unnamed so far. The book was first published on April 24, 2012 through HarperTeen and was optioned for a potential television series through the CW, but was not picked up. The novel was followed up with the 2013 release of The Elite, the second book in the series, followed by the book 'The One.' The fourth book was released May fifth 2015, called The Heir. The Prince, a novella narrated from the viewpoint of Prince Maxon, was also released, along with "The Guard" a novella told by the point of view of Aspen. Two other novellas, called The Queen and The Favourite were also released.
Of the series, Cass stated that she began writing The Selection after thinking about the differences between Esther and Cinderella, wondering if either of them were happy with how they ended up. She also commented that she had written the book "from start to finish", while her writing process for the other books differed.

This was cute. But it was basically a very CW royal version of The Bachelor.

The Elite (The Selection)

The One (The Selection)